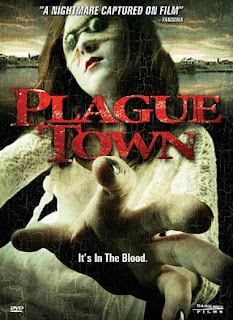 The miracle of birth is often romanticized as being a blessed and joyous event, but that is not always the case. There are often times when other emotions well up after the delivery of child: sorrow when it is stillborn, anger over abnormality, horror in the face of dreadful mutation. The perversion of children has long been a staple of shocking cinema, from cerebral classics like LORD OF THE FLIES to lesser known terror-fests like WHO CAN KILL A CHILD. When you combine a demented dream with miserable metamorphosis and sinister somberness, you get a motion picture that will be delightfully deranged, and that movie is PLAGUE TOWN.

PLAGUE TOWN is the story of a small “family” unit on holiday in the British Isles. Jerry and his bickering teenage daughters Molly and Jessica are lost in the fields and hedgerows of a quiet rural community accompanied by Jerry’s fiancé Annette and Jessica’s newly acquired boyfriend Robin. While the family squabbles about minutiae and squanders precious daylight trying to find the main road and the bus to safety, they wander deeper into territory that is not meant to be explored and as darkness falls stumble upon a town of nightmares. It is here that the five find monstrosities prowling in the shadows and must battle against a maniacal force of children left to their own devices by the adults who brought them into misshapen being. Before long it is evident why Robin, Jessica and Molly’s lives have been spared while the older adults have been dispatched ruthlessly. Try as they might, a horrific fate awaits the three remaining travelers.

PLAGUE TOWN is a wonderful throwback to a time before ridiculously gratuitous and poorly crafted violence, when movies weren’t replete with cheats and bad CGI, but were about being creepy, disquieting and deeply disturbing in a most psychological and visceral manner. Starting off with some daylight pastoral sequences that were attractive and well shot but without needless grandiosity, the initial onus of the story is on the dysfunction Molly and Jessica’s family and their specific relationship. Molly is dark, somber, troubled and haunted but Jessica is pretty, spoiled, selfish and chatty, and all the while their father is intelligent but ineffective and weak. Both the visual and narrative elements in this early segment of the rising action are an effective feint to distract the film fan from what is coming. The half-seen menace and carefully hidden morbidity are interspersed with some sickening sights that help to move along the patiently woven plot, but without haste or needless waste. As the darkness of night deepens so too does the tone become more ominous, and the imagery (while still thoughtfully constructed) becomes more brutal and twisted. All the while this is happening, the viewer becomes privy to where this saga is likely to end up, but it doesn’t matter. Each and every twist in the tale is luridly painted with the grisly colors of ghastliness that are not predictable and yet are also not overdone. What emerges is a chronicle of madness that creeps over the onlooker like any deadly pestilence, it is slow in the beginning but once the grip has been established, it cannot be thrown off. PLAGUE TOWN ends exactly as a lethal bacillus would, it is wonderfully overwhelming as it winds down into an irresistible gloom.

From a technical standpoint, there is a lot to like about PLAGUE TOWN too. Despite some moments of shakey-camera action and some rapidly edited close-ups, most of this film is well shot, effectively lit and thoroughly atmospheric. Whether it is menacing woods, misty paths and roads, dark-enshrouded houses or murky rooms, each and every stage of the movie is bursting with starkly scary but not stupidly sculpted sights. More often than not, the makers of PLAGUE TOWN obviously know that it is what cannot be seen and is lurking in the shadows is far more frightening than what jumps out at you with a bang and a flash. To further augment the aura of the macabre the music and sound effects of this film are perfectly suited to its look and could be some of the best I’ve come across in a long time. There are child-like musical strains that blur the line between youthful whimsy and the insane notes of a sinister song. Ordinary noises and everyday images blend in a sinuous fashion to become horrible and distasteful, further adding to the impact of PLAGUE TOWN. The actors are not well-known nor are they terribly experienced, but they do their jobs well and deliver steady, stable, convincing performances that are a credit to their craft as well as that of the director and the screenwriters. What was possibly the most effective element of PLAGUE TOWN was it reliance on old-school special effects, especially when it came to creating the look of the deformed children of the town. Instead of over-blown prostheses or foolishly unnecessary CGI, PLAGUE TOWN goes for the tried and true formula of taking something holy and making it profane using very delicate means to taint and distort. The end result is a populace of freaks that is not laughable like the “crazy town” in GYMKATA but possibly more malevolent than the cherubs of VILLAGE OF THE DAMNED. The monsters of PLAGUE TOWN are the ace in a hand full of face cards and when used so brilliantly in combination, it is absolutely unbeatable.

To go along with all these strengths is a bonus features menu that while not a flood of extras, is very impressive for its quality. First up is a superb 29 minute featurette called “A Visit to Plague Town” that is a mix of cast and crew interviews and a look behind the scenes at the genesis and the making of PLAGUE TOWN. Nicely balanced in this mini-documentary is the need for the addition of some film clips with all the fine anecdotes of the principles, as well as a peek at the production process. After that is an equally impressive 16 minute featurette called “The Sounds of Plague Town” that explores the musical and sound effects elements of the motion picture. There is a theatrical trailer and for those wise enough to take advantage of it, an outstanding audio commentary with director David Gregory and producer Derek Curl. As has been the case when I’ve had dealings with the films David Gregory has been involved with through Dark Sky and Severin, I have thoroughly enjoyed my experiences and am now looking forward our next meeting of the ways.

PLAGUE TOWN is the proof needed in this modern degenerate age that old-style creepshows can still be made, can still be chilling and can still delight a viewer. We don’t need to take the ill-advised road of torture porn or the unsatisfying plunge into the action/horror film. Imagery can still be subtle and yet sublimely scary. The cadence of the flick can be patient without being slow, the gore can be unsettling without being tedious and the premise of the narrative can be intelligent and yet still evocative. If you once loved the wonderfully morose and yet stylishly gaudy horror epics of Italy and Spain from the 1960s and 70s like HORROR RISES FROM THE TOMB or THE NIGHT EVELYN CAME OUT OF THE GRAVE, then PLAGUE TOWN is your cup of tea. Understand that the brew will not be sweet, but acrid and bitter, but that is what real horror movies are all about. It shouldn’t be a pleasant ride through the Fun House, but a bloodcurdling swoop through the graveyard, twig fingers grasping at you and howls freezing your blood all the way.