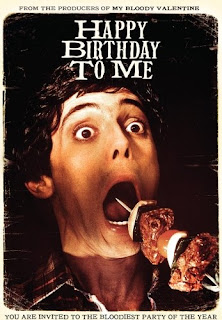 Not all of the wonderfully pithy but frequently accurate wise maxims are totally sovereign for every situation. For example it could be said that, “the more things change, the more they often DON’T stay the same”. As we age, our tastes in music, food and film expand and alter. Our friendships and relationships grow, transform and end. Even our bodies go through stages of maturity and then decline. More often than not, very few things in life really remain constant and just as my eyesight and hearing have steadily varied through the years, my opinion of films does not always remain steadfast. There are motion pictures like THE GOOD, THE BAD AND THE UGLY which I grow to like more each and every time I see it, while THE HOWLING is a flick that I still enjoy, but it does not deliver the shock to the system that it once did. HAPPY BIRTHDAY TO ME is that surprising example of a movie that has improved in my eyes as the years have passed and it is not entirely clear to me whether I expected too much back in 1981 or that I see with a deeper mind now almost 30 years later or a combination of the two.

HAPPY BIRTHDAY TO ME is the story of Virginia “Ginny” Wainright, a young and promising student at Crawford Academy. Ginny joins an elite cadre of fun-loving co-eds known as “The Top Ten”, who come from privileged backgrounds and seem more interested in “sucking dry the marrow of life” than learning. For Ginny, the path to knowledge is a convoluted one, for as she uncovers the mysteries of academia, she also peels back the layers of a very complicated past. As each day passes and Ginny nears her 18th birthday, memories of her mother’s death and her own traumatic physical and psychological ordeal are dredged up, even as a killer begins to stalk and slash through the members of “The Top Ten”. As the body count rises, Ginny must confront painful realities and even more trying circumstances to uncover lost recollections and avoid the grasp of a maniacal killer stacking up college-bound corpses like cordwood.

HAPPY BIRTHDAY TO ME is a perfect subject worth analyzing when it comes to mutating opinions over the corridor of years. Like many film lovers, when I saw this flick right around its original release, I enjoyed it for what it was worth, but was not enlightened nor was I transformed. It seemed to lack the unrelentingly somber and ominous feel of HALLOWEEN, neither did it have the esoteric bloodthirstiness of FRIDAY THE 13th. What I didn’t realize then but now can see with more experienced eyes is that HAPPY BIRTHDAY TO ME actually has more in common with films like Dario Argento’s DEEP RED or Mario Bava’s BLOOD AND BLACK LACE than it does classic 70s/80s slasher fare. HAPPY BIRTHDAY TO ME is not nearly as stylish as an Argento or Bava film, but it is far more diverse in tone and structure than it is given credit for. At first glance, it appears to be a generic slasher flick with some elements of the “slob comedy”. The bare bones of the plot are pure slasher ancestry and the adolescent hi-jinks and chicanery of the “student bodies” feels like a hybridization of an endless parade of 80s “school stories” that proliferated in that decade after the 1978 release of ANIMAL HOUSE. What sets HAPPY BIRTHDAY TO ME apart from the thundering herd of slasher clones in the years after HALLOWEEN and FRIDAY THE 13th is its Italianesque aura. While the tom-foolery keeps the pace moving, most of the kill scenes are shot and executed very patiently. There is an attempt to create real suspense, an authentic sense of mystery and palpable atmosphere. While the camera work in HAPPY BIRTHDAY TO ME is not terribly novel, it is very competent and it does its job admirably. Like a good Italian western, the photographic focus on the characters is totally upon their facial expressions, the emotions passing across their eyes, and for the victims and the shadowy killer, there is often a very impressive panoply of body language that conveys more to the astute viewer than the rapidly paced and edited action sequences that so thoroughly strip modern horror of any sense of mood. There is a thoughtful balance between the psychological components to HAPPY BIRTHDAY TO ME, high-spirited foolishness, dramatic character interplay and restrained but still highly effective gore. The end result is a motion picture that appeals more to me now, after I have had nearly 30 years to watch scads of stylish and powerful Euro-horror flicks and almost as many American exploitation films that often create just as profound a response through different means. HAPPY BIRTHDAY TO ME combines the best of both worlds, trading on its slasher/exploitation roots but mining some of what made Italian and European giallos and thrillers so very enticing.

HAPPY BIRTHDAY TO ME heavily benefits from its full restoration, both visually and musically. Large segments of this film were quite dark and for those of us who saw it first on the Silver Screen, but then saw the murky VHS transfer, we wondered what we were watching the second time around. What emerges from this very strong re-issuing of the original film is a movie that is bright and colorful when it is meant to be so, and deeply dismal when the lights dim and the tone slides down into a pit of gloom. The original score has been restored as well, which for some may not mean much, but for those who saw HAPPY BIRTHDAY TO ME in its original form means a great deal. What made the score of HAPPY BIRTHDAY TO ME special was its almost small orchestral ensemble feel that blended the modern visuals with a much older audio element. The resulting feel of the film was and especially is far more intricate than one would imagine from what is considered to be a second tier slasher film.

The disappointment for those wishing for an even more penultimate re-release is the lack of bonus features. HAPPY BIRTHDAY TO ME has the theatrical trailer on the dvd menu and a pair of auto-play Anchor Bay trailers that engage at the onset of the play function and that is all for dvd extras. Normally, I would rail until hoarse at the lost opportunity here, since the majority of the cast and crew is both still alive and has gone on to the occasional bigger and better project. I will still admit my dejection over a lack of interviews or mini-documentaries when such an undertaking would have been glorious, but this time around I am going to try to be content. That this film was re-issued at all, only five years after its first dvd release and during a time of economic downturn and significant retraction in the genre film dvd market, is rather astonishing. Getting a chance to experience this movie looking and sounding so very good once more will have to be reward enough. If another chance does present itself to re-issue HAPPY BIRTHDAY TO ME one more time and load up the supplemental features with all kinds of goodies, I hope it happens. I am not a deep devotee or an aficionado of HAPPY BIRTHDAY TO ME like I am THE DAY THE EARTH STOOD STILL or THE OMEN, but it is often those little, less remembered tidbits of the past that give us the greatest joy in the present when we learn all about them anew and see them through fresh eyes.

Getting the chance to reappraise some experience like a band you thought you didn’t like or a restaurant that didn’t rock you back on your heels can sometimes be as enjoyable as discovering something wonderful for the first time. It is almost like realizing that we can get a second ride on the Merry-Go-Round or that we really can live a great day over again. I am glad that I saw HAPPY BIRTHDAY TO ME as a young man first and then once more as a much older adult because it has given me the opportunity to reconsider its place in film history as well as reassess its place in my own cinematic life. Watching HAPPY BIRTHDAY TO ME was not a re-awakening, nor did it rejuvenate me by washing all the years away between then and now. It did reconnect me briefly with a vanished time and reminded me that old opinions may not always be ones we should hold onto forever. Maybe I should go give PAINT YOUR WAGON another try? Maybe not.

www.anchorbayentertainment.com
Posted by Saturday Fright Special at 3:35 PM No comments: