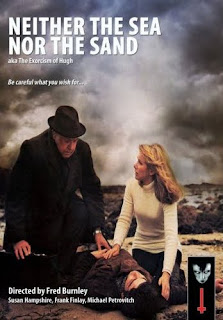 
ENDLESS LOVE, ROMEO AND JULIET, and ZOMBIE are all stories of undying love. Love that transcends this life, wait a minute... ZOMBIE? NEITHER THE SEA NOR THE SAND is a love story with a zombie spin on it. What better way to prove your undying love by not dying? Well, that can get pretty gamey when your body dies, but your soul just won't leave. This is what Anna (portrayed by Susan Hampshire) finds out in this film. So break out the Vicks Vapor Rub to block the smell and enjoy this DVD.

Anna is on holiday in Jersey UK when she meets Hugh (Michael Petrovitch) who is a dashing young lighthouse keeper. The two quickly fall in love and a passionate love affair blooms. They run away together to Scotland for a romantic getaway and then Hugh dies suddenly. (I won't give away what happens. I try not to spoil the movie surprises for you all). Anna is in shock and nearly has a nervous breakdown when a local doctor declares him dead. Anna is clearly devastated. She wants Hugh back with all of her heart and soul. Hugh does come back, but he's not himself. He has very little energy, is confused and cannot talk. As time passes Hugh decomposes and Anna must make a choice between the land of the living and the land of the dead.

NEITHER THE SEA NOR THE SAND put a nice twist on the short story "The Monkey's Paw" that we all read in our 7th Grade English class. Wishes may come true with disasterous consequences. There's similar British film from Amicus in an anthology called TALES FROM THE CRYPT. It's much more gruesome than NEITHER THE SEA NOR THE SAND, which surprisingly had very little gore. The director could have gone all out with body parts flopping off at inconvienent moments, but alas, he was too much of a gentleman to conceive of such crude things. There's was no zombie chomping scenes either. So if you're a gore fan you might want to just watch CITY OF THE LIVING DEAD instead. Hugh is actually the cleanest zombie I've ever seen. The film relies more on atmosphere and tension for it's scare factor than on gross out gut ripping scenes.

The atmospheric setting of the Jersey shore is dark and windy in the film. It's mentioned that it's off season for the tourist town that Hugh resides in. There's plenty of scenes of ocean waves crashing and it seems a great part of the film takes place by the ocean. It's a great date movie for Valentine's Day so pick this up along with a bottle of Champale. NEITHER THE SEA NOR THE SAND would make a great triple feature with ENDLESS LOVE and LET SLEEPING CORPSES LIE. The latter is a little gorey, so maybe you should hold off if your date is one of those squeemish people. But on the other hand, your date might get so scared he/she might jump into your arms for comfort. Think of the possibilites. 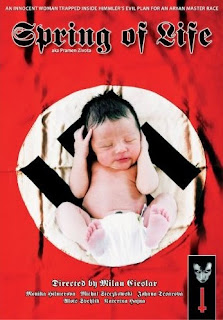 Spring of Life is a surprisingly tasteful film released through Redemption. I'm using "tasteful" rather loosely and I usually do, because I have such low standards in cinema. I went into this film expecting very little, but I got a good return on this one. It's a film that I would definitely revisit again and I recommend it to anyone who's looking for a good story of forbidden love. Yes, a love story as a Redemption release, believe it or not.

Our story begins in the Sudetenland in 1939. As you students of history know, the Sudetenland is the much disputed area of Czechoslovakia that Hitler wanted so badly, because the inhabitatants were racially German. Hitler wanted a unified Germany and to unify the "Master Race". The main character, Gretka, is choosen by the Nazis, as a worthy example of the Aryan race. She is taken away from her family and sent to a spa. Or what she thinks is a spa and she later finds out the diabolical Nazi plan of Lebensborn, where racially pure chosen women will breed with racially pure SS soliders. This is all too much for a nice Catholic girl like Gretka and she later plans an escape. She also encounters the "spa's" resident hostage, Leo, who is Jewish.

Leo is punished when Gretka points him out as the reason she fell through the ice while on her way to the spa. She feels guilty and tries to stop the SS soilders from punishing him, but of course the ruthless Nazis have no mercy on him. Leo comes close to death after this treatment. Gretka nurses him back to health and in the process, she falls in love with him. Like Romeo and Juliet, it's a forbidden love that has a tragic ending.

I thought this would be a straight exploitation film, especially with the subject matter. I pictured sweaty blonde SS soilders heavy breathing all over Gretka. On the contrary, the characters, were all very polite considering the situation. There's even a scene, where one of the chosen women is chastized for having a dirty mind. When I viewed the included interview with author Michael Leapman, I found out why this was released under Redemption. It is an exploitation film in disguise. The Lebensborn Project was a little less aggressive than what is shown in the film. Leapman explains that the project was merely an encouragement of SS soilders to mate with racially pure women. Even if this meant out of wedlock or in an adulturous manner. The mothers then went to a hospital-like setting during their pregnancy and while the baby was waiting for adoption. There was none of the forced sex that Spring of Life would have the viewer think. But the truth is so boring!

Redemption has come along way with their presentation. In the past, the busty vampire mascot of Redemption would give the viewer some background on a film. Her information seemed pretty accurate, but her black contact lenses were a little distracting. By including the interview with Michael Leapman, this DVD went up a few notches on the class scale. It's very informative and worth watching after the feature.

I can't recommend this more. I really enjoy Czech films, like Jan Svankmajer's surrealist extravaganzas and a great film called Divided We Fall (2000). It would make a perfect double feature with Spring of Life. Coincidentally, both films were released in 2000. Pop open a pivo and enjoy. (Pivo is beer in Czech, in case you didn't know).

REDEMPTION FILMS
Posted by Saturday Fright Special at 6:23 AM 1 comment: