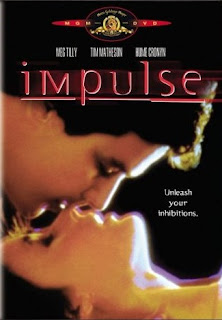 IMPULSE is a film that I just happened upon. Literally! It was a cheap find at a flea market for a buck. This is what I'm reduced to because the economy is in the crapper. Small distributing companies are going under and the ones that are in business can't afford to give the Saturday Fright Special staff free movies. We've been so desparte we've actually started renting movies again. But I'm so cheap I go to the flea markets and yard sales. Just this past Sunday I picked up a great copy of the complete series of CHiPS on Beta for only 25 cents. What a buy! But I digress. I should be talking about IMPULSE.

IMPULSE stars Meg Tilly as a young dancer, Jennifer, living in in the city with her surgeon boyfriend, Stuart, played by Tim Matheson (of Animal House fame). Jennifer receives a phone call from her mother, who starts ranting and screaming at her and then a shot is heard. Jennifer and Stuart rush to Jennifer's hometown where a recent earthquake has happened. The minute they enter the town things seem strange. People are rude, discourteous and down right selfish. Petty crime, irritable dispositions and having intercourse with your brother-in-law at a seedy honky tonk seem to be a day-to-day occurance in this jerkwater town. Everyone Jennifer and Stuart come into contact with seem to be on the defense. Things start to climax as the days pass and Stuart and Jennifer want to find answers.

IMPULSE looks like it is a romantic thriller on the VHS cover, but nothing could be further from the truth. The 9 1/2 WEEKS look-a-like cover was probably some suit's bright idea to get people renting this film. It's so misleading. The cover should have my favorite scene in the film: an old man pissing on Stuart's tires. But I digress again. IMPULSE is very similar to Romero's THE CRAZIES. A town consumes something and it poisons their mind and all inhibitions are gone. I won't give away what the town consumes in IMPULSE, that's part of the mystery in the film. There are some pretty intense moments in IMPULSE, but over all it's one of the videos you'll only want to watch once. Apparently, this film is on DVD, but I've already spent the buck, so who cares. If you got some spare change and some time to waste watch IMPULSE. Or just rent THE CRAZIES, the original or remake. Same thing.
Posted by Saturday Fright Special at 9:37 AM 1 comment: