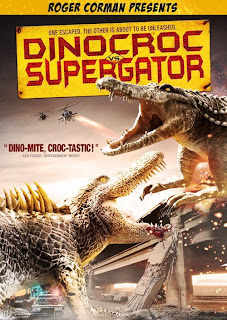 Another in SyFy Channel's long-running series of multi-syllabic huge-hyphenate monster melee flicks, produced by Roger Corman and directed by Jim Wynorski, the man who brought us hits of both the horror (CHOPPING MALL, THE RETURN OF SWAMP THING) and hooter (THE BARE WENCH PROJECT, CLEAVAGEFIELD) variety. Here we have the age-old tale of science-for-profit not-so-accidentally creating a pair of giant mutant lizards (the titular Dinocroc, sort of a cross between a raptor and a croc that walks on its hind legs, and the Supergator, a giant spiky-spined version of Captain Hook's nemesis) that break free and run riot in a tropical Hawaiian paradise. It's up to a dorky EPA investigator (Corey Landis, a nice everyman change of pace from the usual chiseled hero you find in these sort of things), a sexy (to be expected for a Wynorski film, just about every female role is filled out with babes) local conservation officer (Amy Rasimas), and "The Cajun", a legendary swamp hunter (Rib Hillis -- think a buff Crocodile Dundee without the accent). The head of the corporation that spawns the giant pair of swamp scrappers is played with a sense of fun by noneother than David Carradine, in what has to be the fifth or sixth film that's been released since his death in 2009 (for a dead guy, he's keeping pretty busy…). Director Wynorski (here working under his "Jay Andrews" alias) also makes an appearance as a farmer with a half-chewed head of cattle, and there are several subtle references to past Corman films throughout, including probably the only shout-out to SHE-GODS OF SHARK REEF that I've ever seen.

But what you want when you pop in a title like DINOCROC VS. SUPERGATOR is action, and this flick delivers. Unlike some other recent SyFy monsterfests, this baby doesn't make you wait until the last 10 minutes for your monster mayhem, giving you rampaging 'roided-up reptiles before the first minute is over. Monster appearances continue throughout, with plenty of "monster pops up and snatches victim in a flash" moments that I personally love. This really plays like an update of 50's giant mutated animal flicks, and the not-perfect but not-bad CGI can be viewed as the modern equivalent of passable stop-motion or model work of years gone by. The titanic tussle of the towering twin terrors doesn't happen until the last few minutes of the film (and is over rather quickly), but by that time there's been so much carnage and lumbering lizard action that you don't mind the brief encounter between the two. As this was originally a made-for-TV movie, the level of gore and gazongas is about what you'd expect from non-pay-cable, a little gooey here and there but nothing that would make it all that inappropriate for a monster-crazed kid to watch.

Hats off to Wynorski and Corman for delivering a modern-day equivalent of the kind of fun frivolous flicks that kept so many of us indoors as kids on sunny summer days, glued to local TV shows like CREATURE DOUBLE FEATURE and reveling in the rampaging ruination of remorseless reptile rabble-rousers.