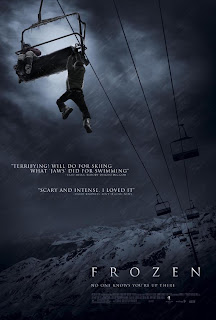 Adam Green can kiss my ass.

But seriously, the guy has some directing talent. I can't complain about the cinematography regarding either HATCHET or FROZEN. (Or even the acting.) It's his writing that sucks.

1) When the lights go out, you wouldn't seriously begin screaming at the top of your lungs?

2) Survival tip: the first thing I would do to keep warm is to pull my hat over my eyes and the collar of my shirt over my chin. But I guess we absolutely need to see these Hollywood starlets faces to relate to them, eh? By the same token, any normal person would have pulled their hand into their sleeve to keep it warm if they lost a glove.

3) When trying to crawl across a rope, don't just try to put all of your weight on your hands to shimmy across. Wrap your legs around as well.

4) When you're freezing to death, I don't care who you're with and I don't care who you are, your first natural survival instinct is to huddle together for warmth. After the first night the two principles are still a good two feet apart, nevermind not fucking themselves to death. Hell, the tv series TAXI had them beat on that front by about 32 years!!!

5) WOLVES???!!! Seriously, WTF? This is a tense enough situation as it is, and you STILL have to pull a species into the scenario that doesn't even exist in the environment you set the movie in? Now THAT is a sign of a shit scriptwriter!

Other than those 5 things, It's a pretty good movie. Three Stars.