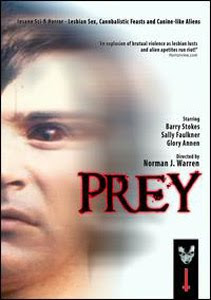 I'm always up for a British Horror film. THE SATANIC RITES OF DRACULA, TWINS OF EVIL and COUNTESS DRACULA are a few of my favorites. There's lots of tension and usually very little gore. PREY was much different than the films mentioned. It's a mix of Science Fiction and horror and lesbian porn. Usually lesbians in British horror films are also vampires, but Jessica (Glory Annen) and Josephine (Sally Faulkner) are the good old fashion kind: human. Jessica and Josephine are cut off from society living in a large house in the country where they witness a huge flash of light one evening. Jessica suspects that it is a UFO landing nearby, but Josephine thinks she's being ridiculous. The next morning the ladies take a walk and come upon an unexpected guest: a man by the name Anders Anderson skulking around the ladies house and generally looking disoriented, but little do they know a cat faced alien has taken over his body. Funloving Jessica invites him in and their lives are about to take an interesting turn Anders presence adds tension to Jessica and Josephine's already rocky relationship. Josephine is a man-hater who controls Jessica's every move. We're given the impression that Josephine spends most of her time in jealous rage. Anders stays with the ladies, much to Josephine's chagrin, and a love triangle starts to form. All this happens despite Ander's odd behavior. He's awkward, quiet, and vomits every time he eats Jessica's cooking. This makes him the worst house guest ever to be put on film. The situation worsens during a little party Jessica throws where Josephine tries to seduce Anders. Jessica steps in the room just in time to make Josephine remember that, oh yeah, she's a man-hating lesbian. It's all downhill from this point on, especially when we learn Josphine has a dark secret she's been hiding. Jessica discovers her secret and decides to run away with Anders, but will she live to even see the inside of Anders' car?
PREY was pretty entertaining and very humorous, but whether it was supposed to be or not is debatable. Josephine's non-stop comments about men are enough to make anyone bust a gut. Jessica's naive and chipper ways make her the character that the viewer can really sympathize with the most (plus she takes her top off about five times in the film, so you fellas will enjoy her too). Barry Stokes as Anders is brilliant as the robot-like alien. He tells the ladies he's never played a game, can't eat and we later learn that he can't even swim. In a drawn out rescue scene complete with tinny synth music, we see Anders just can't do shit. Except keep calm while Jessican and Josephine have a knock-down, drag out, slap-fest of a cat fight.
The last few scenes are depicted on the back of the DVD case which could mislead any movie-goer that the film has blood and guts in every scene, but in actuality the film can be a bit slow for some people's taste. Me, I like a good build-up and background story. A new indie film called HOUSE OF THE DEVIL uses this technique well, but it's also been criticized for it, too. So there's your warning. Watch PREY if you'd like.
Posted by Saturday Fright Special at 1:10 PM No comments: