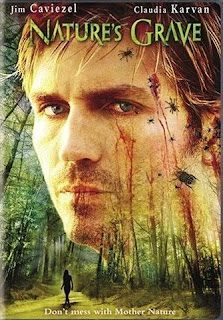 The wilderness has long been a domain mankind has had a uneasy relationship with, and as such it has caused us to form a sense of attraction and revulsion. Most people today would say that wild places are a realm of beauty and serenity, but in our not too distant past, hardy souls like the Pilgrims thought differently. The early North American colonists viewed the Great Outdoors with emotions akin to enmity and deeply-seated mistrust, a haunt of darkness and a place of rough savagery desperately needing to be “subdued”. In today’s world of respect for “green” and political correctness, painting the wild lands in a light other than the most reverent of tones just isn’t done. Certainly “monster” movies dealing with forces of nature make the beasties out to be baddies, but to demonize the back country just isn’t proper anymore. NATURE’S GRAVE (aka LONG WEEKEND) is a film with some clear strengths and an equal number of glaring weaknesses, and possibly because it is of Australian origin it is a bit more daring than the average American flick, since it takes a tack that isn’t too common today by pitting man against both himself and Mother Nature in a desperate battle for survival and ending up the loser.

NATURE’S GRAVE is the story of Peter and Carla, a 30-something married couple struggling with intense relationship friction borne of grave past mistakes that have created cracks that reach to the core of their commitment. In an effort to rekindle their dying romance, Peter makes plans for a camping trip on “Moondog Beach” where the surf is up and the landscape is untamed. Despite Carla’s misgivings and a strong penchant for more “civilized” surroundings, they make the long trek to meet some friends and get some “R & R” over a long weekend. Small problems begin to bedevil them and darker hints at trouble to come arise, even as Peter and Carla’s efforts at marital renewal sputter and then die like a candle left in a sconce too long. As it becomes increasingly obvious they are unable to combat their personal demons, Peter and Carla also become aware that something sinister is happening at “Moondog Beach”. Before long, they are racing to escape the noose that is being drawn around them and escape the snare that seems intent to snuff out their lives even more effectively than they squelched their love.

From a purely aesthetic point of view, there is a lot to like about NATURE’S GRAVE. Except for the last act of the film where a small degree of shakey-cam is introduced (probably for the reason of intensifying the instability of the situation and the characters), most of this movie is well shot, even superbly filmed. There is a multitude of spectacular landscape scenes starting right from the opening credits and going all the way to the end of the action. Whether it is panoramic vistas of sky and surf or beach and brush, if it was the purpose of the film makers to tempt the viewer into visiting Australia and increasing tourist traffic there, they could have scarcely done more. NATURE’S GRAVE is absolutely breathtaking during much of its run and the impressive thing is it is done both on the big and small scale. The small-set camera work looks very compelling, just as the expansive scenic views were simply staggering. Someone who had been deeply inspired by the awesome scope of the Australian coastlands scouted locations with a fervor that is evident and then the film crew shot those exteriors with equal passion. In addition to stunning visual components, there is a subtle but engaging incidental music score and soundtrack that helps in developing the sense of tension and threat that slowly builds in this motion picture. Like any good play, NATURE’S GRAVE is totally focused on the two main characters, stays in one general place for the duration and requires the onlooker to experience their pain without distraction. As a result, a degree of emotion counter to the joyousness of the landscape photography is created by the plot and setting concentration and the contrast between the two is a strength that can’t be overlooked.

From a story and character’s point of view, NATURE’S GRAVE has its problems. For the average American horror fan raised on gruesome slasher fare or psychologically bruised by torture porn, NATURE’S GRAVE will feel sluggish, maybe even slow. It is a VERY patient film that takes its time getting where it wants to go in the end and if you are not willing to give it the time it needs, NATURE’S GRAVE will likely end up as a disappointment. The story works hard to strike an early balance between drama and thriller with little about it that would cause it to be considered a horror film. Towards the middle of the narrative, the drama element takes center stage and for those hoping for the action to intensify, this is where NATURE’S GRAVE might lose them. It is only towards the end when the “wheels have come off” that the thriller/horror aspect of the film reasserts itself and the payoff occurs. Most may be able to see what was coming in the conclusion, but it is a spectacularly gloomy and grisly downer ending, and for someone like me who is sick of “safe and happy” denouements like WHILE SHE WAS OUT, an audacious finish like NATURE’S GRAVE where bad things happen is a welcome change of pace. From a character perspective, NATURE’S GRAVE has more problems for there even tough there was a dark and unpleasant chemistry to Peter (James Caviezel) and Carla (Claudia Karvan), there are difficulties that tainted the ultimate outcome. Both actors are screen veterans and know how to portray their characters effectively, but the problem lies in the way they were scripted. In an effort to create the successful downer ending and play up the angle that “Mother Nature knows best”, Peter and Claudia are callous, uncaring people who start as slightly unsympathetic and steadily degenerate into deeply disagreeable characters. Their dysfunction and dislike for each other is poignant and very patiently developed, but the plot concept is that the viewer will come to take sides against them if they are detestable. This is always a mistake and it does not work once again. However, if we had come to root for them had they been sympathetic, then the climax would have been even more predictable, but possibly more heart-wrenching. In the end, I did not abhor Peter and Claudia as too often I do when screen roles are crafted to be somewhat loathsome, but I could not fully relate to them nor their ultimate fate, fascinating and wonderfully gruesome as it was.

NATURE’S GRAVE has an even greater weakness than pacing or character development and that is a total lack of dvd extras. There are two auto-play trailers at the head of the main menu and that is it. I realize that companies are cutting back in these tough economic times, but so are consumers. To charge more than $20 retail for a dvd and then not to include any extras is a colossal blunder. Film enthusiasts want to know more about a project. James Caviezel was Jesus in PASSION OF THE CHRIST and to not talk to him about NATURE’S GRAVE or to not include a commentary with director Jamie Blanks who was also the main editor and created the music is an enormous faux-pas analogous to going on a safari expecting to see kangaroos and getting wombats instead.

NATURE’S GRAVE is a film that is probably not marketed appropriately. The dvd box art and tag line are likely to attract classic horror or monster movie enthusiasts, but that is not what this film is about. It isn’t an overt action or thriller rocket ride, so people expecting an adrenaline rush will be disillusioned. It is clearly not going to attract viewers wanting to see a drama, but that element may be its strongest suit. If you want to see a very patient movie about people who put themselves into a terrible fix and then fall apart at the seams, all the while surrounded by some glorious scenery, NATURE’S GRAVE is right up your alley. Unfortunately, there aren’t that many people in that narrow demographic.