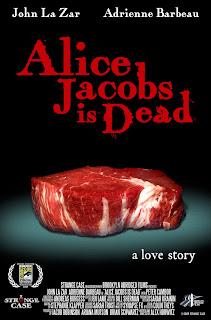 It is always nice to do something a little different. Since 2006, Saturday Fright Special’s Fangtastic Features has seen A LOT of feature motion pictures pass through our hands, many of which we have reviewed. The only problem is that feature films, like novels, can get a little formulaic, and it is nice to “step outside the box” every now and then. Just as reading short stories is a superb change of pace for the literature buff, short film formats are a very welcome diversion for the movie lover. ALICE JACOBS IS DEAD came to us from Strange Case Films, and it stars two veteran performers of note, Adrienne Barbeau of THE FOG and CREEPSHOW as well as John La Zar of BEYOND THE VALLEY OF THE DOLLS. Teaming up two iconic actors in a short feature (21 minutes) dealing with a topic that is a hallmark concept of the horror genre feels like something right out of The Twilight Zone, and that is exactly the kind of impression that ALICE JACOBS IS DEAD leaves you with.

ALICE JACOBS IS DEAD is the story of Dr. Ben Jacobs and his wife Alice. Dr. Jacobs is the world famous creator of the Z-Virus serum, which saved the planet from the devastating effects of a contagion that ravaged the populace and the infrastructure of The Earth. Slowly struggling to rebuild society with the help of the temporary salvation of the serum, Dr. Jacobs’ attention is less focused on the renewal of the world’s life and more on his own personal goals. His wife Alice, thought to be long dead as a result of the Z-Virus, is living in seclusion in their home, still heavily infected by the insidious plague. Dr. Jacobs races against time to save Alice from total surrender to the bacillus, but in giving way to his undying love for his wife, Dr. Jacobs makes a series of ethically questionable choices leading to a sequence of terrible outcomes and then final disaster.

For anyone who ever has watched a George Romero movie or the film THE LAST MAN ON EARTH, there is nothing surprising about the story of ALICE JACOBS IS DEAD, but it doesn’t matter. ALICE JACOBS IS DEAD is a tale of all-consuming love and how terribly blinding that can be to a person who should be calculating the cause and effect nature of their actions. It is a story built around the juxtaposition of romance/beauty and revulsion/horror. The plot is spun patiently and moves in gentle waves towards a climax that you know is coming but cannot turn away from. Like a good Greek tragedy, the viewer hopes for salvation, knowing full well that catastrophe looms on the horizon. What is most interesting about the narrative of ALICE JACOBS IS DEAD is that its quiet beginnings and steady progression towards calamity are deeply reminiscent of older anthology television series like One Step Beyond, Alfred Hitchcock Presents, Night Gallery or even Dark Room. It is only a few curse words and the bloodiness of the climactic scene that separate ALICE JACOBS IS DEAD from its TV cousins and land it firmly in the genus of short film.

From a technical standpoint, there is also a lot to like about ALICE JACOBS IS DEAD. It is well shot and well lit, the sound is crisp and clean and the acting is clearly that of seasoned professionals. While ALICE JACOBS IS DEAD is a dark tale and the lighting scheme is clearly meant to be “ominous and moody”, I can clearly see what is going on without straining my eyes, as is too often the case when it comes to most modern camera work. There are no deleterious effects of “shakey-cam” either as well as no mumble-a-thon epics. Like a well-made TV episode of yore, ALICE JACOBS IS DEAD is competently done. Watching the narrative progress, I was struck by the fact that in a short amount of time I was no longer looking at actors I knew so very well, but at the characters they had become. The contrast of the coldly logical and barely animated but haunted Dr. Jacobs and the hardly contained, distinctly unglamorous and yet repellingly creepy Alice Jacobs was brilliantly done. Their heartbreaking love and even more horrific end was palpably powerful and that was as much a testament to the acting skills of Adrienne Barbeau and John La Zar as it was to a tried and true story that I had seen done many times, but still enjoy.

For those who enjoy a good short-story in film form and like their imagery subtle at the start and then savage at the close, ALICE JACOBS IS DEAD is worth your time. I felt like a kid again sitting down to something that would have fit right into a half hour block like The Twilight Zone. The only thing that was missing was the Alka-Seltzer and Ballantine Beer commercials.

www.strange-case.com
Posted by Saturday Fright Special at 8:19 AM